Modern bathroom trends may come and go, but one kind of décor that seems to have stood the test of time is Victorian style. Originally built to be purely functional, Victorian bathrooms had a stunning, ornate look that has remained prevalent to this day. In an era where we all crave a Pinterest-worthy home, Victorian-inspired bathroom design is incredibly popular.

But how do you get the look? What exactly do you need to create your own Victorian bathroom? Well, whether you simply want to take some inspiration from the period style, or you want your bathroom to feel like you stepped into 1896, we’ve got you covered. So, on that note, let’s talk about how to create a Victorian-inspired bathroom. 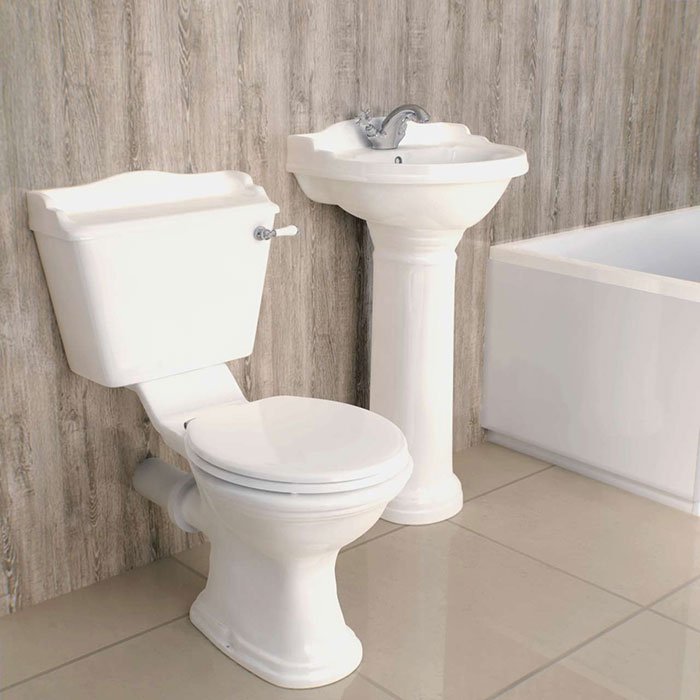 For those who aren’t keen on high level toilets, or don’t have the wall space to accommodate one, there are other options for achieving a traditional appearance. Close coupled toilets are available in traditional designs that fit in nicely with a Victorian-inspired bathroom. Make sure to opt for one with a flush lever, as opposed to a flush button, to maintain the traditional appearance. 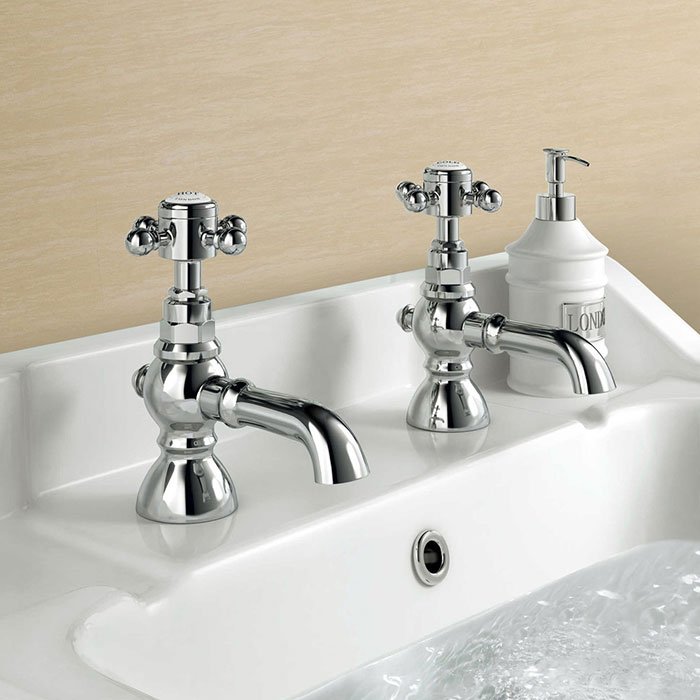 Wash stands were a staple item in Victorian bathrooms. Wash stands can be found ready-made here.

Alternatively, there are pedestal basins available in traditional designs that blend well with Victorian-inspired décor. These are available separately, or as part of a toilet and basin set to make your bathroom renovation even more simple.

Whichever type of basin you choose, it’s important to choose the right taps to go with it. Make sure to choose traditional taps to match your Victorian-inspired basin. When it comes to Victorian style, two taps are better than one. A two tap basin was the standard in Victorian bathrooms, so opt for a pair of taps, like these ones, to achieve the most authentic look.

However, if you prefer a mixer tap, there are other options that will give a similar look. Mono basin mixer taps are available in traditional designs to fit with a Victorian theme. Another great option is a 3 tap hole basin mixer, which comes with two separate controls and a central spout. This gives a very similar look to Victorian taps, with the modern functionality of a mixer tap. 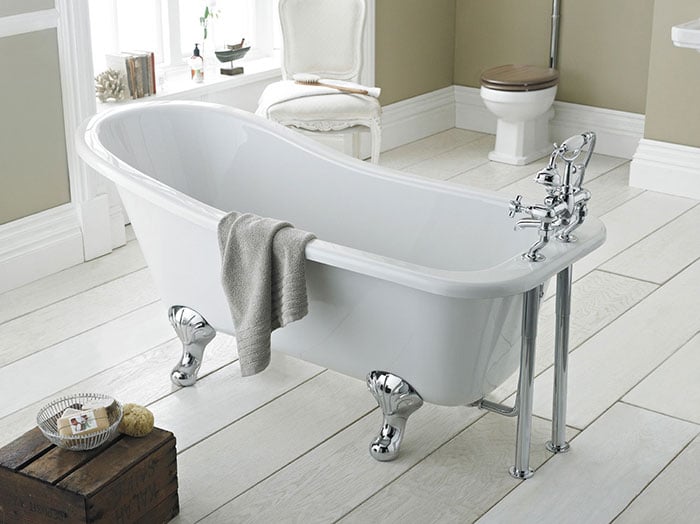 The main focal point of a Victorian bathroom was generally the bath. Free standing baths were a popular style, particularly roll top slipper baths. Traditional slipper baths are widely available, so it couldn’t be easier to replicate this style. Make sure to opt for one with traditional feet to match the Victorian theme.

If a freestanding bath is out of reach, a simple straight bath can also be used in a Victorian-inspired bathroom. Simply add traditional bath panels; these are available in various colours to suit you and have a vintage appearance that will match a period design.

Two tap systems were the most commonplace choice for Victorian baths, so a double tap is the best option for an authentic Victorian look. Alternatively, you could opt for a traditional bath shower mixer tap, like this one. This type of tap offers a stunning period look, as well as the modern functionality of a mixer tap and shower handset. 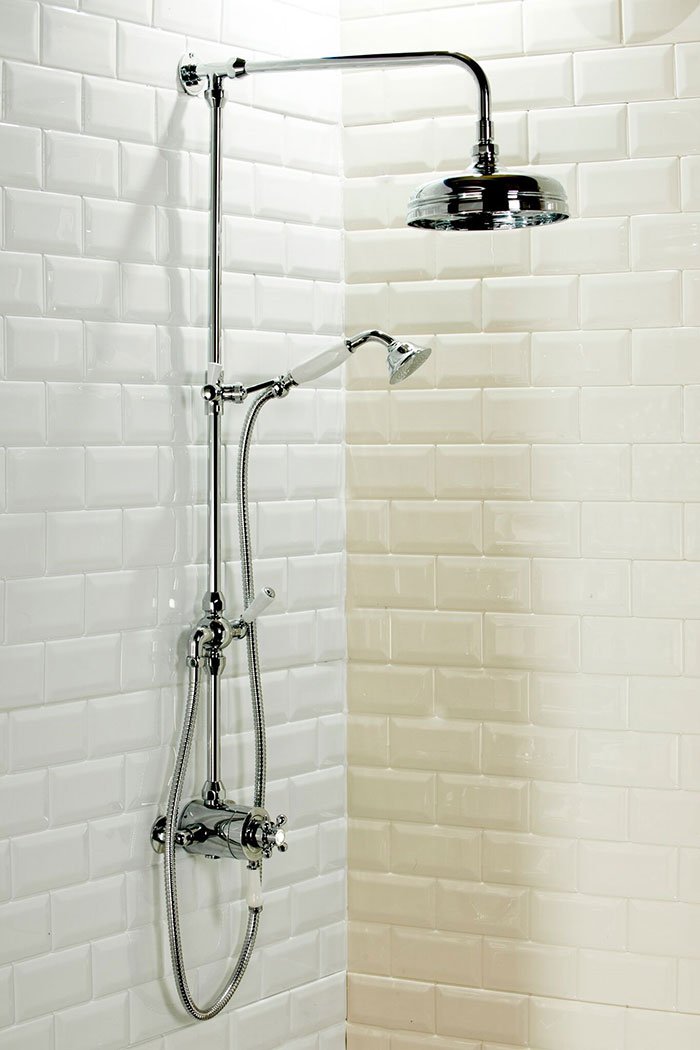 Showers obviously weren’t commonplace in Victorian bathrooms. However, this might be one of the areas where you simply want to take inspiration from Victorian bathrooms, rather than replicate one completely. It may not be authentically Victorian but, in this day and age, it’s probably unrealistic to expect someone to omit a shower from their bathroom entirely.

Fortunately, there are ways to add a shower to your bathroom, without compromising on the Victorian-inspired décor. A shower bath is a great option that will allow you to keep the traditional appearance, more so than a modern shower enclosure. Alternatively, you could install a walk in shower or wet room with a simple glass screen; this would allow you the convenience of a modern shower, without obstructing the vintage appearance.

As for choosing a shower, a traditional thermostatic rigid riser shower, like this one, is ideal for a Victorian bathroom. The traditional design mixes well with Victorian-inspired décor. 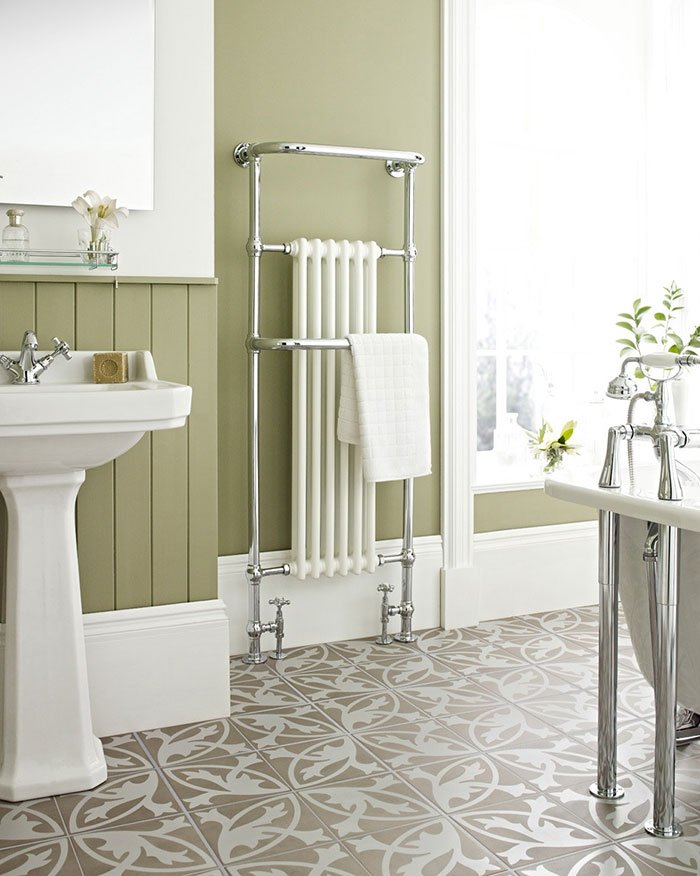 Radiators were a staple item in many Victorian bathrooms. In fact, the Victorian era was the period when radiators started to become decorative items, as well as functional ones.

A traditional radiator is a great option that adds to the Victorian appearance. It also has the added bonus of being highly functional, with a design that’s perfect for hanging towels to dry. 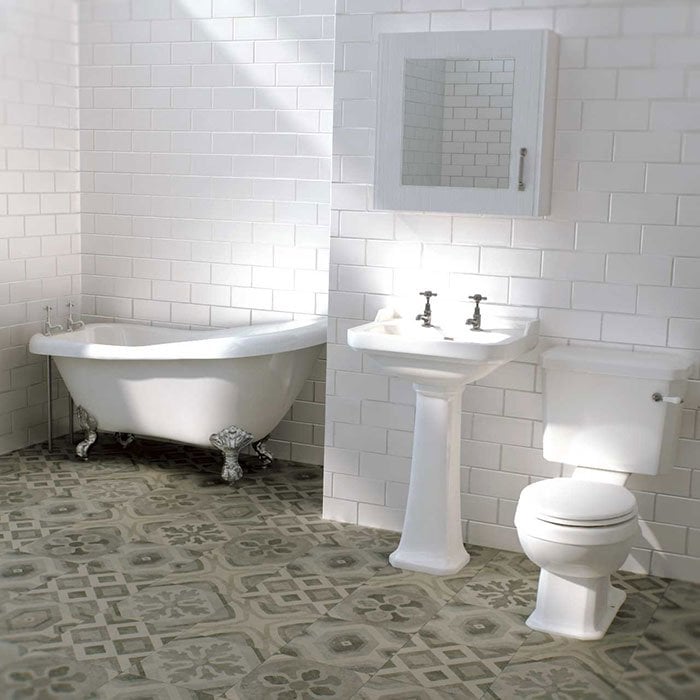 Tiles are something that can make or break your bathroom design. A bathroom with stunning Victorian fixtures can be spoiled by the wrong choice of tile.

Wooden floors were commonplace in Victorian bathrooms, particularly during the early Victorian period. A modern way to replicate this is to opt for wood effect tiles to get a similar appearance, without the hassle of trying to maintain real wooden flooring in a humid bathroom.

Towards the later Victorian period, the wooden bathroom floors gave way to more functional floor tiles. Heavily patterned tiles were a popular choice in Victorian bathrooms, particularly for floors. Opt for a bold patterned tile to replicate the look.

For walls, the best option in a Victorian-inspired bathroom is to keep it simple. Opt for plain square tiles or metro tiles. Basic colours like black, white or grey work well here, but you could also opt for plain tiles in a bold colour, like green or blue, to create a dramatic look.